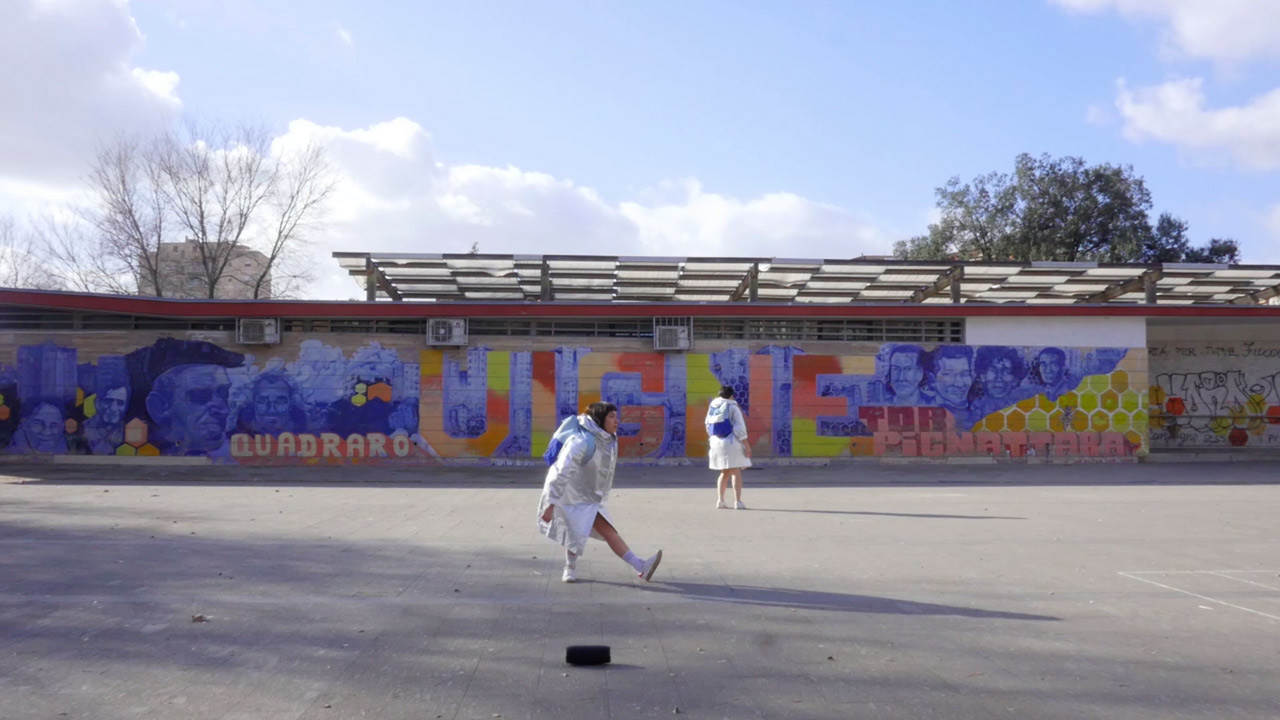 Tagadà is a relational system that explores the condition of coexistence in distance. Created during the pandemic, the work explores the potential of the virtual dimension as a place where encounters happen without ever meeting. Within Tagadà the connection occurs without a readable reciprocity and the performers influence each other through an indirect exchange of informations.
The aim is to overcome the idea of loneliness by giving value to different levels of communication and presence. In this project public space is chosen as the place to explore the possibilities of relationships in between real and digital.
TAGADÀ started from an idea of Fabritia D’Intino and it developed thanks to the collaboration with Daria Greco and Federico Scettri.

Fabrita D’Intino is a dancer and choreographer. She graduated from the National Dance Academy (Rome) and from the ArtEZ (Arnhem, NL). As dancer she works with the choreographers P. Pireddu, S.Sandroni, G.Rossi, R.Guratti, S.Lombardo and G. V. Giampino. From 2013 to 2019 she coordinates the Barcelona International Dance Exchange-BIDE. Her activity includes stage performances, public space interventions, participatory projects and research formats, presenting her work in many international contexts. Since 2018 she is part of the companies Chiasma (Rome) and Cats & Snails (Lille, France as a dancer and maker.

Daria Greco is a dancer and choreographer, permanently engaged in the productions of the Chiasma group of S.Lombardo, with whom she works in the role of interpreter and curator of the choreographies, collaborating with many institutions in Italy and abroad. She also appears as interpreter in Forest Reloaded (Italy) by R.Guratti, Plubel (France) by F.D ’Intino and C.Vanlerberghe and in CAMPFIRE /dove comincia l’incendio by DOM (Italy). Since 2020 she is co-founder of Ostudio, a workspace born from an artistic cohabitation project in Rome, and since 2018 of SiR_sharing in Rome, a project for networking and sharing research practices.

Federico Scettri is a drummer and composer. He performed in many contemporary jazz bands in Italy, Europe and America and collaborated with musicians such as F. Bearzatti, W. Parker, P. Fresu and J. Tacuma. In addition to drums, he also plays laptops and live electronics, both in extended formations and in solo. He collaborates with the choreographer F. D’Intino since 2016. He currently collaborates also with singer Chiara Civello and different bands such as “Cosmic Renaissance” (G. Petrella), “Grace in Town” (F. Sferra and C. Alegiani) and “C’mon Tigre” (M.Molinelli and P. Baldoni).